The Ajax 23 One Design class is one of the largest one design classes currently racing in the Fal. The boat was designed by Oliver Lee in 1966 as a contender for the new three person Olympic keelboat (the Soling was eventually chosen).

Nationally the Ajax class is split between two fleets: Our own and that of the Royal Harwich Yacht Club. The organising of the National Championship alternates annually between the two clubs. We enjoy an excellent relationship with our Harwich counterparts, several of whom bring their boats to Cornwall not only for the Nationals but also to compete in Falmouth week. St Mawes boats receive a warm and helpful welcome when going in the opposite direction to compete in the National Championship in Dovercourt Bay.

The Ajax is ideally suited to the weather conditions in the Fal. She is a solid and stable boat which races happily in heavy weather - each year several Ajaxes take part in an unofficial passage race to Fowey (and race twice daily during Fowey regatta week). Although exciting and lively to sail the Ajax does not require extreme strength and youth of helm and crew. Many women take part in Ajax racing, with the number of occasional and full time female helms now reaching double figures. We are pleased to note Yachts and Yachting’s description of the class as enjoying “excellent racing” and being ”known for its friendly and helpful owners”.

The Ajax class is presently enjoying great popularity in the Fal, to the point where the search for available boats has led potential new owners to source boats abroad. We expect double figures in club racing while the line-up for Falmouth Week should exceed 30. There are currently no plans to build new Ajaxes. 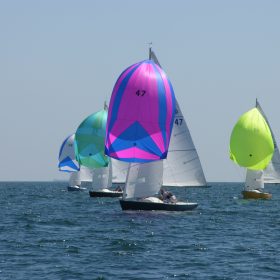 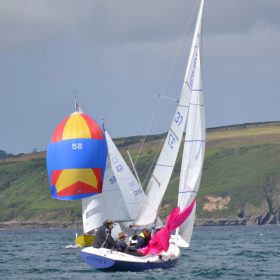 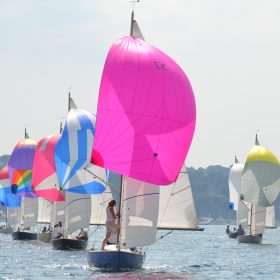