The St Mawes Fleet
All the St Mawes IODs have been brought down from Scotland where the British revival of IOD racing began in the 1970s and 1980s. (In 1990 the IOD World Championships were held at the Royal Clyde and Northern Yacht Club.) Sadly the Scottish fleet has been in decline in recent years, but as these Scottish boats have been offered up for sale this has created a great opportunity for St Mawes.

IODs are not new to the Carrick Roads – Sanchia has been based in Falmouth for many years – but it was Roger Smith, of Polvarth Boatyard, who spotted the opportunity to create a racing fleet of IODs in St Mawes. Following Robin Dicker’s restoration of Mitzi and Roger’s purchase of Amelia, four more IODs – all of them wooden – have been purchased from Scotland and brought down to St Mawes over the past two years. There are now six IODs in the harbour – Mitzi, Happy Go Lucky, Kyla, Wild Goose Pirate – and Amelia. St Mawes now hosts the only IOD racing fleet in the UK and we are in the process of registering the fleet with the international class association. We hope gradually to increase our fleet further, such that one day we may be in a position to host the World Championships here in Cornwall.

Uffa Fox once described International One Designs as “lovely little ships, with lines as elegant as a smelt’s”. We hope you enjoy seeing these wonderful yachts on the waters of St Mawes for many years to come. If anyone is interested in acquiring an IOD – which can be purchased for considerably less than a Sunbeam, for example – they are encouraged to discuss the opportunities with Roger Smith.

A Brief History
IOD Photo It was in the mid-1930s, shortly after the Great Depression, that Cornelius ‘Corny’ Sheilds - a well known American racing helmsman - decided that the cost of bespoke 6, 8 and 12 metre yachts had become exorbitant. On a trip to Bermuda in the spring of 1935 he spotted the kind of boat he would like, a pretty day boat riding high on a mooring in Hamilton harbour. She was called Saga and was built to the rules of a 6 metre class by the renowned Norwegian boatbuilder Bjarne Aas.

As Sheilds wanted races to be won on the water, not on the drawing board or in the sailmaker’s loft – as was the case with the metre-class designs – he persuaded Bjarne Aas to design a new one-design that would share the wonderful lines of the 6 metre yacht he had seen in Hamilton harbour. Corny Sheilds was a persuasive fellow. He bought the first IOD Alieen to Long Island in 1936 and by the following year there were 25 IODs racing in the Sound.

The IOD class quickly spread. Bermuda also took delivery of seven in January 1937. The next year fleets were established in Marblehead, Massachusetts and Northeast Harbor, Maine.

The IOD’s instant success in America drew an impressive array of sailors whose names appear, and continue to appear, prominently in America's Cup and ocean racing history; men such as “Bus” Mosbacher, Arthur Knapp, Ted Hood, Cornelius Shields Jr, and more recently Russell Coutts and Chris Dickson were all successful IOD sailors before and after they came to fame as America’s Cup helmsmen.

However, the Second World War and its aftermath were nearly fatal for the IOD class. During the war, legend says that Aas buried the construction jigs to protect them during the Nazi occupation. Everywhere the yachts were laid up and the materials used in the ‘golden era’ of wood, iron and mild steel were savaged by neglect.

IOD Photo The Americans were keen to keep their fleets alive and persuaded the Aas shipyard to build two IOD glass fibre moulds in the 1960s. The hulls were designed to deliver the same performance as the original wooden ones. Three glass fibre boats joined the American fleet, but in 1973 the Aas shipyard stopped GRP hull production.

Meanwhile, many of the yachts around the world had fallen into disrepair and it looked as if the class was heading for extinction. It was the Americans that continued to maintain their enthusiasm, and a few managed to coax the class back to growth. The GRP moulds were shipped from Norway to the USA in 1973 and the Class Association purchased the design patents. In America these new fibreglass hulls helped bring the class back to life and created enthusiasm to restore the remaining wooden yachts.

The IOD has also retained the affection of today’s greatest helmsmen. The King Edward VII Gold Cup – held each year in Bermuda – is one of the most prestigious match racing competitions in the world, and one which has been sailed exclusively in IODs since 1951. The Cup is keenly contested by helmsmen such as Russell Coutts (who has won it seven times), Chris Dickson, James Spithill, Stefan Lindberg and Peter Gilmour.

About International One Design

The International One Design fleet is a very recent addition to the St Mawes fleets.. 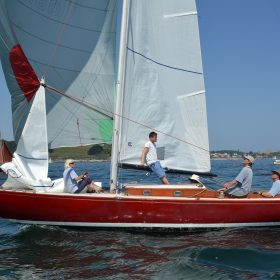 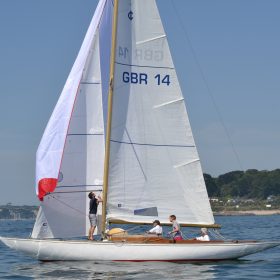 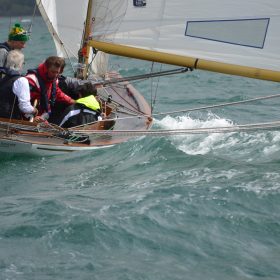