The St Mawes One Design evolved as a result of a Dr James defeating a young Frank Peters in friendly races held off St Mawes in the early 1920s. These defeats led to Frank Peters designing and building Aileen in 1923, the highly successful forerunner of the present day fleet.

The St Mawes One Design is a popular traditional wooden day sailing boat with an active fleet based mainly in St Mawes but with some in Falmouth and other parts of the Carrick Roads.

Frank Peters, designer of the Class, had been part of a family firm, which had built boats in St Mawes at Freshwater Boatyard for some two hundred years. Indeed the firm was very well known for having built most of the original pilot gigs used so extensively around the County and particularly in the Isles of Scilly.

When the St Mawes Sailing Club was formed in 1920 racing was always in handicap starts because of the disparities between the boats wishing to take part. Frank Peters then raced in a 14ft-clinker dinghy, White Duck, which had been left at his boatyard by three army officers stationed at St Anthony during the First World War. He was, however, often beaten by Dr. James in his William Ferris built 16 footer Phantom. These defeats led to Frank designing a boat with which he could win races. This boat was named Aileen, after his wife and became the forerunner of our class.

She was sixteen feet long, launched in 1923, numbered No.1 and was of carvel construction with pine planking on ribs of rock elm. To give the boat stability six 56lb iron weights were incorporated into the design together with a cast iron centreplate weighing 150lbs. She was gunter rigged with a mainsail holding 105 sq. ft and a jib of 45 sq.ft. Both the mast and yard were hollow bamboo and it had roller reefing on the main and jib roller with a 2'6" bowsprit.

Aileen was so successful in racing that Mooncat (No. 2) and Phoebe (No. 3) were built soon afterwards. Capt. M. Napier, the first owner of Phoebe and an active member of the Sailing Club encouraged the growth of the class and also class racing. By the start of the Second World War a steady fleet of between four and eight boats were racing regularly on a weekly basis under the aegis of the St Mawes Sailing Club. During the twenties and thirties Frank Peters built thirteen although no more than two per year were ever built. Each boat took approximately six weeks to construct.

Little Lady (No. 9) cost £55 complete and on the water compared to a new One Design costing approximately £7,500 to build today. But then in those days a rowing dinghy constructed of the very best materials would have cost about £1 per foot.

Numbers further increased in 1938 when the design was felt by the Royal Cornwall Yacht Club to be ideal for a cadet class and seven boats were built by the Ponsharden boatyard at Falmouth. Frank Peters collected a copyright fee for each of these boats but they were strangely never quite as quick as those built in Frank's own yard. The main reason for this different performance was the heavier construction that the Ponsharden Yard seemed to adopt. This weight penalty ensured racing success was rare for the "Falmouth Boats" although this was disproved 49 years later when Nick Muller in Widgeon (a Ponsharden boat) won the Class Championships.

Keen competitive racing started again as soon as the war finished and the fleet was enhanced by the addition of six new boats built by Frank Peters between 1949 and 1951.

In 1953 there was a major turning point in the fortune of the class. Whenever there is a one-design class there are always those who seek to win by bending the rules. Mr Anthony Beasley, the owner of Rainbow (No. 23) made a special fitting allowing the gaff to lie closer to the mast and thus enabling the boat to point a good deal higher than the others. Indeed the fitting almost made a Bermudan type rig. There was uproar, but it was then suggested that the class be converted to Bermudan rig and after considerable dissension this was agreed. It increased the height of the rig considerably and also the amount of sail by 20 sq. ft.

In a very short space of time all boats were converted to Bermudan rig in order to keep them competitive. Class racing flourished during the fifties and a further five boats were built by Frank Peters before he retired in 1964. Boatbuilder Brian Crockford built No. 34 in 1969. But unfortunately the racing fleet became depleted, as other boats became more attractive to the visitors and also to local inhabitants of St Mawes. By 1977 class racing had ceased.

Then some of the boats started to change hands and enthusiasm for the class was re-generated especially through the efforts of Andrew Tyler who purchased Vesper (No. 29) in 1978 and became Class Captain. The Class Association held its first meeting on the 6th September 1980 and was formed soon after. Fleets of eight to ten boats started racing but the numbers increased considerably during holiday periods. Local boatbuilder Jonathan Leach took this enthusiasm one step further and, with advice from Frank Peters, built another one design which became Outlaw (No. 35). This was the first one design to be built for 13 years and proved a great success, so much so that another thirteen have been built by Jonathan to date. Construction of the new boats has been confined as far as possible to the original specification even though no plans or moulds were in existence.

In 1987 the Class Association traced Aileen (No. 1) and she was donated to the Association by the Goldwyn family. She was brought back to St. Mawes and restored by Jonathan Leach to her original specification with a Gunter Rig. She was relaunched on New Years Day 1990 at 10:30 am in the presence of Frank Peters at Freshwater Boatyard. A special occasion.

1995 was a sad year for the class. On the 11th June 1995 William Francis Peters, or Frankie as we all knew him, the Class Association Commodore, designer and builder of 24 boats, passed away. He was laid to rest at St. Just Church in sight of his beloved sea on Monday 19th June 1995. The Class are indebted to him for his vision and craftsmanship, and he will live on in our boats so that he will not, and can not, be forgotten. A founding member of the Class Association, Chris Leach, also passed away in 1995 but in his memory Rainbow (No. 23), the boat he sailed and loved, was presented to the Association by his family. She is now loaned to local youngsters on an annual basis so they can sail and race her as if she were their own. 1999 saw two further boats Cheerio and Persephone join the Association fleet kindly presented to the Class by their owners Douglas Barton and Mary Muirhead.

A total number of 45 boats have been built over the past 76 years of which a surprising 43 boats are still in existence.

About St Mawes One Design (SMOD) 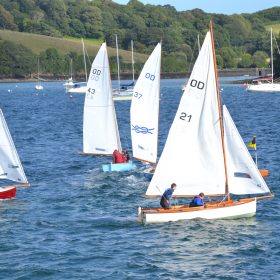 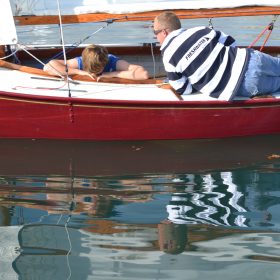